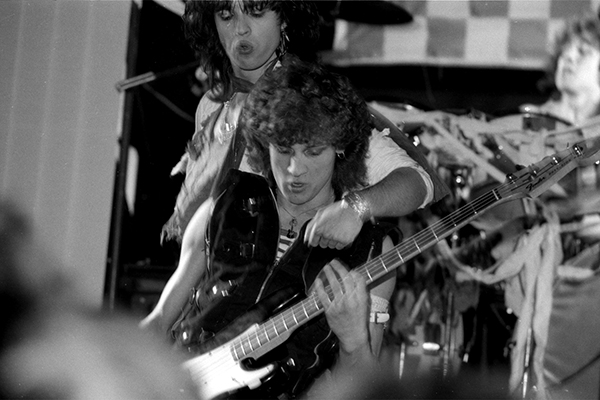 The release of "For the Universe" (1985) received a lot of positive media attention. As a result, Rick and Gerard were interviewed by Mick Wall at the mega-popular Power Hour on Sky Channel. This TV show was worldwide broadcasted by satellite and reached a large audience. Despite the global exposure a tour abroad stayed out, but the national club scene was visited extensively. Martyr played wherever they could play. There has always been plenty of quality and talent around in the Netherlands, but bands especially didn't get a chance. Mainly because of the behaviour of major labels that didn’t want to invest in their local music scene but only wanted to release American and British productions on a license basis. This was the most economical and profitable way for them. Label manager Bram Kloos of Megaton (Boudisque) saw a gap in the market and started Metalloid Records, with this new independent label he wanted to draw more national and international attention for the Dutch Hard Rock and Metal scene. And signed Martyr as the first act for his new label. The band was endorsed with a bigger recording budget and the first release on the Metalloid label was a fact. Everything was handled with great professionalism, from start to finish. By accident it turned out that the costs of making the album cover were higher than calculated. But nevertheless “Darkness at Time's Edge” (1986) saw the light of day and Martyr received again rave reviews. Remarkable on this release was that they had undergone a stormy development and especially the progressive influences (Queensryche) left their mark on the bands unique recognisable sound. And now it was about time to push things to a higher level, starting with a stunning release party at “de Vrije Vloer” in their hometown Utrecht. And …. the band toured the Dutch club scene again, waiting for any interest from abroad.

Due to the bankruptcy of Metalloid Records Boudisque (1987), the band is without a record contract and had to go back on the market. With the arrival of keyboards, the global heavy metal scene went through a lot of artistical changes. This new direction was blown over from the States to the European continent. And many European bands also wanted to take advantage of the success that these American bands had on the other side of the ocean. So was Martyr, and some line-up changes came around the corner, a new drummer was found in Wilfried Broekman, second guitarist Marcel Heesakkers left and was replaced by a keyboard player in the person of ex-vocalist Robert van Haren. This was the end of the Metalloid era, but the beginning of a new melodic course with interest from a major label. Several demos were recorded for Polydor and the trademark progressive metal sound disappeared and was totally replaced by accessible Hard Rock with lots of catchy melodies. On the 6th of March 1987 a successful try-out show with Martyr-new style was played at “de Bliksem” in Brummen. Partly due to the policy of the major labels in the Netherlands a deal came not in sight. After a while lead singer Gerard Vergouw, bass player Toine van der Linden and drummer Wilfried Broekman left the band.

In January 1988 Martyr recorded a new 3 track demo at the Future Sound Studios at Utrecht with an almost brand-new band composition with Addo Kruisinga on vocals, Guus Riteco on bass, and believe it or not with the return of former guitarist Marcel Heesakkers on keyboards and Elias Papadopoulos on drums. Martyr goes on for some time and gradually disappears into the underground, wherever it came from. Some band members were active in other projects and bands like: Vangauw, Medallion, Syrenade, Mindscape, Hot Legs, Wild Ride, Picture, and My Brother Jake. Martyr reunited in 2001 to play an old-skool set at the Heavy Metal Maniacs festival. This was the ultimate trigger to start it all over again and the band is now stronger than ever. 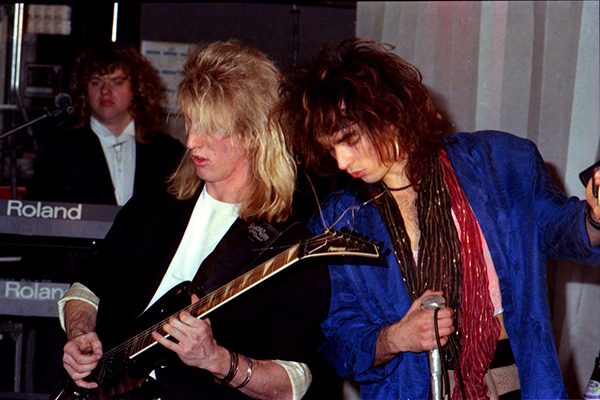