At that time, a tour was normally accompanied with the promotion of a new album, but Megaton decided to wait with the release of “For the Universe” until the Hannover Music Messe. To promote and introduce the band over there, which they saw as a great promise for the future, to all present international (major) record labels and distributors. But the light for the German tour showed green and Martyr seized the opportunity to go with or without a record in the pocket. It was a chance of a lifetime. And also for me, to go on the road with a band and to make a report of it. After half a working day at my internship and spending the whole afternoon with packing and arrangements for the upcoming trip, I took the train from Zutphen to Apeldoorn at 21.45 to meet Martyr's new singer Gerard. After waiting for about an hour at the railway station, the rest of the band finally arrived by bus. First, we had to pick up a drum stage at the house of Togethers bass player Dirk Schiphorst which was at the countryside near Apeldoorn. But that ride nearly went wrong because Gerard almost sent us into a swampy meadow, I intervened just in time to guide us into the right direction. At Dirk's place, plenty of beer flowed and once we had loaded up, we left for Germany, Emmerich to know exactly….

Once we arrived at the border crossing, our driver and sound engineer Teun had to go to the export office with the necessary paperwork. After being sent back and forth, he obtained the necessary stamps to get permission to travel with the band’s equipment through Germany. Finally, the night's journey on the soul-deserted highways began. Every now and then we took a break to stretch our legs and drank the necessary cups of coffee to stay awake. The journey is proceeding very well and is provided with a great soundtrack. Besides the bands master tape of the new upcoming album, the following was played in the tour van: Queensryche – The Warning TNT – Knights of the new Thunder Mercyful Fate – Don’t break the Oath Ratt – Out of the Cellar Stryper – Yellow and Black Attack Warlord - And the Cannons of Destruction Have Begun... Loudness - The Birthday Eve, Devil Soldier, The Law Of Devil's Land, Disillusion. Van Halen - 1984 At 7.00 AM we finally had breakfast at one of those well-known highway restaurants and “en masse” the hard rolls with the fried eggs went into our stomachs with of course the necessary cups of coffee. Only a present German gentleman was disturbed by our enthusiastic behaviour. Probably his morning mood…or it was our convenience.

Finally, we arrived in Singen and on the way to the hotel it was already clear that the festival was well promoted, witness the many posters that were hung. Once we arrived at the hotel, we were led to our sleeping places by a puffy innkeeper. While Teun went for a nap, the rest of us went to explore the concert hall and make the city unsafe.

9.00 AM – Wakeup call and breakfast. But before we left, 2 things had to be rectified. First, the lack of photos for the record sleeve. The band had just finished the recording sessions for their debut album “For the Universe” and needed some pictures for their album cover. And they asked me if I would like to do it. Of course, I would do it, I was there any way to make a report of the tour. But your pics on an album cover, this was for me a nice opportunity as a photographer to gain more recognition. They handed me over some special films which they got from the record company, and I shot these during their show. Second issue. Roadie Ron Huygens had to take care about the light show and no one of the other roadies was present to put on a monk's robes for the opening part of the show with the intro tape. So I was asked if I wanted to do this, and of course I did. After some practice…. I was ready for the job. 😊 Once we arrived at the venue, something had to be rectified again so that Martyr could play as the second band at the festival. The German band Mass wanted to perform earlier because of another gig elsewhere in the country and could therefore use every time gain. Martyr traded their spot and started one position later. The hall was already packed when the intro tape got started and now it was my turn to go on stage in the monk's robes and torch. The way back off-stage was a different story, but luckily the present fireman helped me off that torch. “Snow and Fire” blasted through the speakers and the audience went wild at the first tones. And Gerard pushed it one step further by singing the chorus in German - “Schnee und Feuer”. The ice was broken, and the crowd got ignited by the band's youthful enthusiasm. It was noticeable and very striking that some songs were sung along aloud, this was partly due that earlier recordings of the band had found their way to the fans via the famous tape-trading circuit. The set ended with the traditional “Speed ​​of Samourai”. And after a quick clean-up we headed to the bar to drink beer and meet fans……fans??? And the German beer flowed freely, and Elias was sagging with drummer Roland Bayer from Beast. At one point Roland said: “I'll stop for a while, because I still have to perform” to which Elias replied with a laugh: “I don't have that problem anymore, because I have already played”. In short terms, enough commotion and it became a crazy mess…and… what goes on the road, stays on the road. The next day we were heading home, and the return journey went faster than the outward journey. Only at the Dutch border we had to wait for 1.5 hours, because the import office was closed. After obtaining the well-known stamps for importing everything back in our homeland, our journey could continue and we arrived in the middle of the night in Apeldoorn, where I stayed over at Gerard's home. The next day an X-Mass show was played with Together in the Gigant at Apeldoorn. After that I returned homewards from my adventure with the necessary cool stories 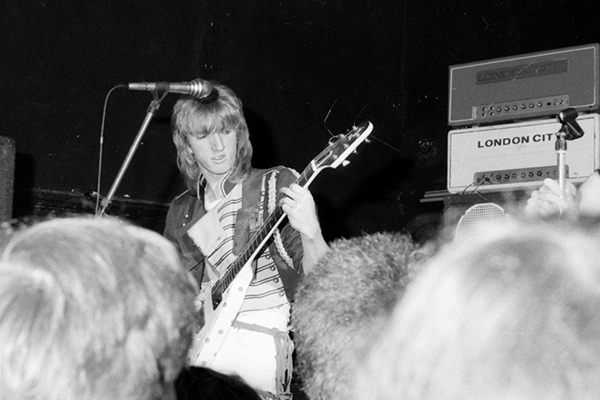